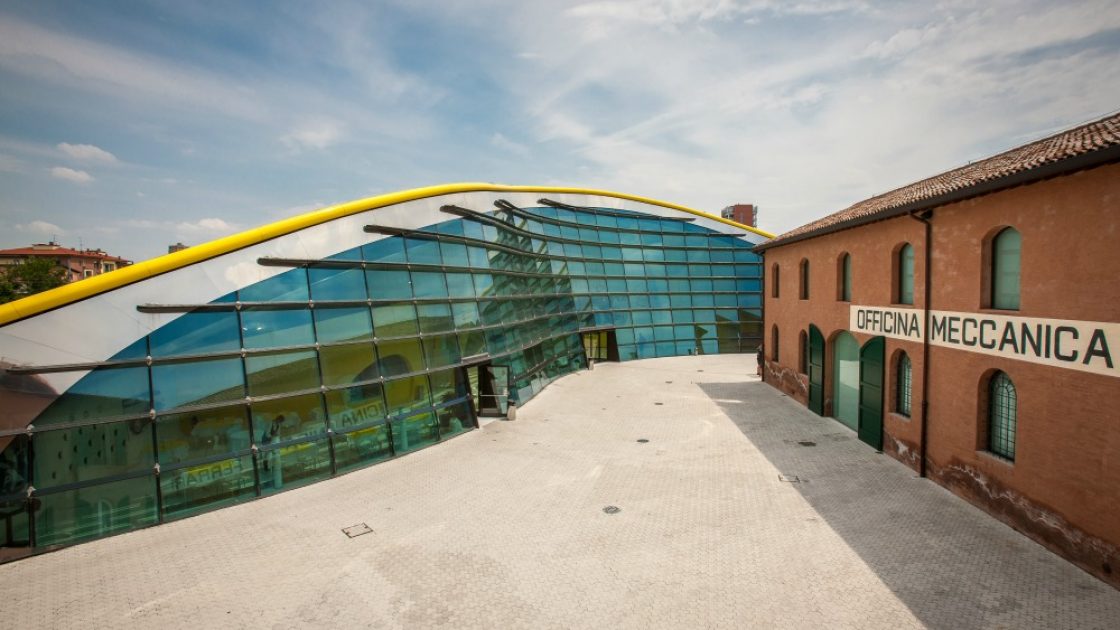 The starting point is the square outside the Train Station. With the station behind you, turn left onto Viale Crispi, then after about 200 m take Via Guido Mazzoni and follow it (under a short underpass) to Via Paolo Ferrari. About 300 m further on, the Enzo Ferrari Museum is on the left; this complex comprises the house where Enzo Ferrari was born and a contemporary building shaped like the bonnet of a car. As well as viewing the many cars on show, in this futuristic building visitors can also watch a fascinating film that tells the magical story of Enzo Ferrari’s 90-year life. Next door, in the perfectly restored workshop where Enzo’s father once worked, is the Ferrari Museum of Engines. Proceed southwards along Via Paolo Ferrari, take Via Giuseppe Soli then turn right onto Via Piave. Take Via Giovanni Muzzioli and join Viale Caduti in Guerra. Cross this busy road to the Giardino Ducale Estense, once the gardens of the Ducal Palace, containing the lovely Palazzina Vigarani, the 17th-century garden house which is now used to host exhibitions. Leaving the gardens, turn right onto Corso Cavour; you will soon come to the large Piazza Roma.

This square is dominated by the 17th-century Palazzo Ducale, or Ducal Palace, which now houses Italy’s Military Academy. Guided tours of the Palazzo are available at weekends (booking required).
Take Via Farini and then turn left along Via Emilia. You will very soon come to Piazza Mazzini on your right, with the attractive Synagogue built in the second half of the 19th century.
Continue along Via Emilia and when you come to the Chiesa del Voto church on your right, turn left onto Corso Duomo to get to Piazza Duomo.
Here you will find the facade of the Cathedral or Duomo, one of the finest masterpieces of the European Romanesque, with superb architecture by Lanfranco and carvings and sculptures by Wiligelmo.
On leaving the Cathedral, take Via Lanfranco, where you will find the Cathedral Museum and, shortly afterwards, the Ghirlandina Tower, the Cathedral bell tower and symbol of the city.

You will then come to the City Hall, which actually consists of various buildings erected in different centuries, starting in the Middle Ages. It is still the city’s seat of government.The City Hall stands on Piazza Grande, the heart of the city, with its famous “Pietra ringadora” or “Speakers’ Stone”, a block of pink marble from which speakers used to address the populace.
The Duomo, the Ghirlandina and Piazza Grande have been awarded UNESCO heritage status. Cross the square back to Corso Duomo and rejoin Via Emilia, turning left. Proceed to Piazza S. Agostino where it is worth taking a look inside the church of the same name; its many artistic treasures include the beautiful “Compianto del Cristo morto” (“Lamentation over the Dead Christ”) by Antonio Begarelli.
On the same side of the square as the church is the Palazzo dei Musei, or Museum Building, which houses a number of prestigious cultural institutions: the Civic Museums ( Art and Archaeology and Ethnology); the Estense Art Gallery, one of Italy’s leading collections, which reflects the interest of the Este family, Dukes of Modena, not only in paintings and sculpture but also in archaeology and the decorative arts; the Estense Lapidary Museum with many items of great artistic value; the Estense Library, with exquisite illuminated manuscripts from the 14th century to the 16th century; the City Historic Archive with its eight centuries of documentation on the history of Modena and its duchy; and the Luigi Poletti Civil Art Library, specializing in the history of art and architecture.
Once back in Largo Sant’Agostino, take Viale Berengario.
On the left is the “Foro Boario”, the old agricultural exchange, which now houses the Economics Faculty and a civic exhibition venue.
Proceed to Via del Voltone and take it to reach the church of Santa Maria della Pomposa and the adjoining small square, then turn onto Via Taglio and follow it to Largo San Giorgio, with the church of the same name. This returns you to Piazza Roma, where the itinerary ends. You can now make your way back to the Train station along the broad Corso Vittorio Emanuele II; the centre of this street was once the city’s port on the Naviglio canal, used by the Este family to travel to their summer residence near Padua.