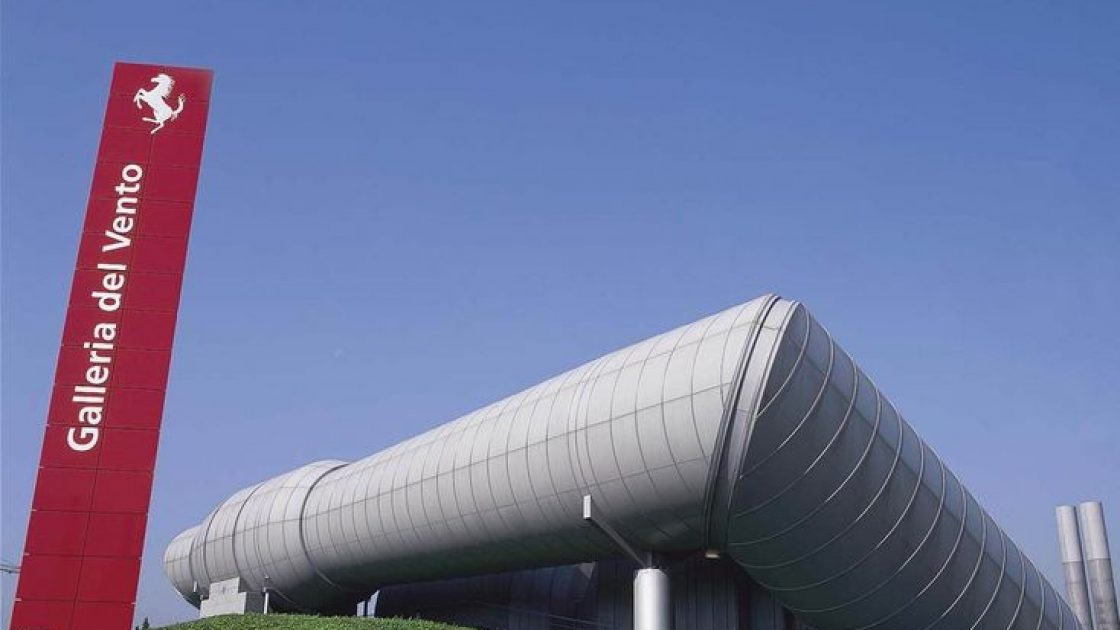 An architectural masterpiece and state-of-the-art facility, the Wind Tunnel was designed by architect Renzo Piano and opened in 1997.

Occupying an area of about 150,000 m2, it forms part of the Formula Uomo project, which aims to improve working conditions, also through the creation of architectural spaces of excellence. The new wind tunnel was the first work to be constructed within this program: it is a massive structure for the aerodynamic development of Formula 1 racing cars.

The Ferrari Wind Tunnel houses the entire aerodynamics department, and the building is in constant use. It is an extraordinary blend of architecture, art and engineering. The most striking feature of this work is the fact that, instead of enclosing everything inside a box, Renzo Piano intentionally placed the mechanism on the outside, in a shape which evokes the form of an automotive engine.

Inside a wind tunnel air is blown onto the car while special sensors gather data to verify the aerodynamic resistance to the air flow of its various parts.

The large tubular structure, emerging directly from the ground, reflects the union of leading-edge technology and design: Renzo Piano himself decided on this configuration, to evoke the idea of an engine component planted in a field of wheat.
The tunnel has a climate control system to regulate the temperature. A belt synchronised with the wind speed enables models to simulate any kind of attitude and motion. The wind is produced by a fan more than 5 m in diameter, with a power rating of over 2,000 kW. A sophisticated monitoring system measures the wind’s speed, direction and turbulence with the utmost precision. A complex mechanism allows the simulation of any kind of car attitude and motion, and models of cars in scale up to 65% can be used, as well as real, actual-size cars. A climate control system regulates the temperature with a precision of 0.5°C.
The wind tunnel is also used for tests not strictly linked to the automotive world, such as aerodynamic tests on the skiing materials used in speed skiing races (the world champion and record-holder Simone Origone used it early in 2015) and on bicycles (Paralympic champion Fabrizio Macchi in April 2014).
The 2014 Sochi Olympics marked the start of a partnership between the Italian Olympic Committee (CONI) and Ferrari under which the wind tunnel was used for tests related to various Olympic sports: Bobsleigh, Skeleton, Speed Skating, Sailing and Canoeing. The arrangement launched for the London 2012 Games, covering summer events such as Rowing, Kayak Canoeing and Archery, also continued.
There is a little of Maranello and Ferrari in the two medals won by Italians Cristof Innerhofer and Armin Zoeggeler at Sochi 2014.

There is no public access. Where: via Grizzaga, behind the historic Ferrari plant